When the wind starts blowing leaves across the loading screen and scary carnival music is playing in the background, you know it’s Most Feared time in Madden Mobile. The annual Halloween-themed promotion is back for the 2017 season, and arguably better than ever.

As the carnival music suggests, the Most Feared event has taken the form of a spooky carnival with three separate tracks to earn special Elite Most Feared players. There are also uniforms or three imaginary teams with distinct Halloween connotations, the Bats, Black Knights and Nighthawks, as well as two powerful defensive units.Still, it’s those sweet Elites you’ll probably crave the most, and we’re here to tell you how to get them.

How to Earn Elite Most Feared Players

The carnival is set up with three different event tracks, each with its own rewards. For all three of them, you’ll need to complete Most Feared events in that track to earn collectibles you can trade for Gold Most Feared Players. Those, in turn, can be placed in sets to earn Elite Most Feared players. 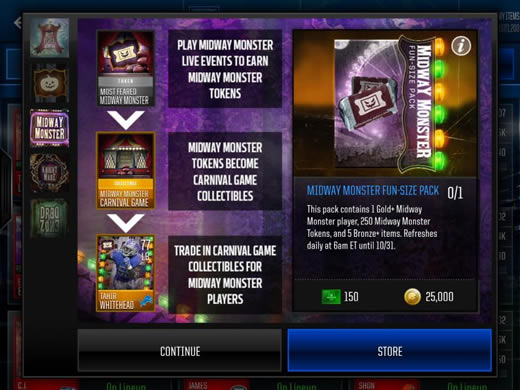 DredZone Maze – In contrast, this is the trickiest of all three sections of the carnival, but it has the coolest prizes in the form of Out of Position (OoP) players. The Maze itself consists of multiple events for which you receive only coins and XP for beating until you find the exit, where you can win tokens toward a DredZone Fun House Mirror. Happily, it only takes one of those plus any Silver Player to trade for a Gold DredZone Player, though you still need 25 Gold DredZone Players to trade for one Elite DredZone Player.

Bonus Tip: Gold Most Feared Players can be cut to give you half the amount of tokens or collectibles you need for a Gold player in another track. It works on a rock-paper-scissors system like this: Knight Mare -> DredZone -> Midway Monster -> Knight Mare. Use this to your advantage if you are working toward Elite players in one area and wind up with Gold players from another.

That should be all the info you need to grab as many Elite players as possible to strike fear into the hearts of your Madden Mobile opponents. But be sure to get going on them now, because all the Most Feared events and sets expire on October 31.