EA Sports delivered another solid entry with NHL 18 earlier this month, but the development team has already released its first content update and it will enhance almost every aspect of the game.

There are a ton of gameplay improvements to traditional play and NHL Threes. There’s also improved levels of customization for franchise mode and deeper presentation concepts. Take a look at this gigantic list of changes in NHL 18, per the game’s official site. 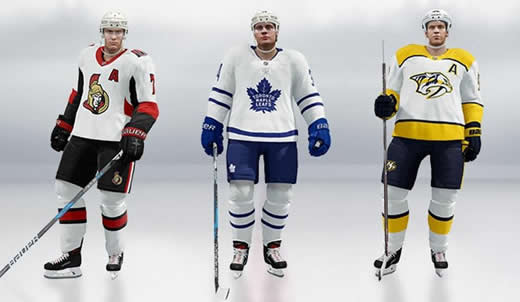 • Improved AI puck carriers in 1-on-0 situations during play and in shootouts
• Updates to Defensive AI decision making so that they stay with their check more consistently
•  Updates for AI teammates that would skate into shooting lanes instead of standing in better positions to deflect the shot or get the rebound instead.
• Updates to AI shooting logic during penalty shots.
• Logic updates for AI goalie pull situations.
• Improved shot logic for the AI
• Improved positioning for offensive AI players away from the puck so that they take their stick position/handedness into account more and position themselves and adjust their facing better based on their intention.
• Added improvements for AI skaters that would switch to skating backwards during breakouts.

• Added the ability to blend back into skating faster out of deking
• Various shot animation improvements
• Added improvements to skaters that were missing the puck too often if they were directed to perform a shot without picking up the puck first (one timers and shots from loose pucks).

• Updates to improve animation blend issues out of shot blocks.
• Improvements added for players doing a board pinch when the puck position didn’t make sense for it.
• Blending improvements when transitioning into defensive skill stick.
• Updates to allow the Defensive Skill Stick state to override hit intent if the hit hasn’t started to be thrown yet. This allows players to be on and off RB/R1 without letting go of the right stick.
• Updates to improve an issue where the Defensive Skill Stick state caused user skaters to lose pickup functionality
• Added in variance of error to the new poke check system based on player control, direction from the players facing and relative speed of the puck. This means that a player is most accurate when skating in a controlled manner and poking a still puck in front of themselves and least accurate when poking against their momentum behind themselves at a fast-moving puck. Each of these factors are also tied to the player’s attribute ratings.
• Improved hip check controls to prevent clashes
• Poke check animation assets improved for increased poke checking accuracy before any error is added.
• Added reaction delay based on a player’s awareness after a puck is deflected off a stick/body as players were reacting too quickly to defensive deflections.

You’ll be hard-pressed to find a larger update in any sports video game. This goes beyond the normal tweaks and gameplay stabilization that we usually see in patches and updates. It’s refreshing to see such a widespread update designed to make an already solid game even better.

The NHL 18 official preview and feature set has been released! We will list all of the major new features underneath, but will not go into detail on many of them as there have already been several locations you’ll be able to realize that information; however, there are a few I would like to plunge deep into, like the most underrated feature! 64 Multiplayer Combinations.

We would highly recommend subscribing to this brand new Official EA Sports NHL YouTube station since they’ll probably be posting a few exclusive articles there to acquire their subscriber base up for NHL 18.

Those will be the principal new features that are already being pushed right now.

New dekes and defensive ability stick are gameplay shifts and there is in fact much to speak about there until we see how the beta performs. I tried the new dekes at Alpha a couple months back and they have been fun but will not make any decision until the beta.

EASHL 3v3 and also the Multiplayer options on the other hand… I might never sleep again once NHL 18 drops. The latter of these two features is a much bigger deal than it is being made out to be! Something I have wanted for ages and I think that no NHL experienced will welcome with open arms as it has been quite a long time arriving.

NHL 18 will let you play just about any multiplayer game mode(except EASHL) together with buddies couch co-op fashion, on line, OR a mixture of both. That is right, you can have a friend at your house in your own Online Versus team subsequently have a friend at his own home also in your own group versus real players in a ranked Online Versus match. Or perhaps jump to a game of Threes with your two teammates and connect with three other friends in an unranked match to get a full 3v3 friendly game going, not certain who’s that many friends but I’m sure someone does.

Should you take into account the various game modes this really makes for far more than just 64 Multiplayer blends too. It is no secret that NHL is way more entertaining with friends and the limitation in previous NHL’s of needing to have your friend in your house to play with co-op Online Versus(or any multiplayer mode) was a bit tragic.

This feature will even function as Multiplayer offline ways as well — so for example you may play one player HUT co-op with a friend against the AI.

I have been enjoying Online Versus in NHL ever since it was introduced back in NHL 2007 and over the past ten years I can not even imagine the number of games I’ve played sofa co-op fashion with my cousin — It was just what we did growing up and into our early 20’s. Countless games not any doubt.

As you get older, life’s obligations get in the way and you simply don’t have enough time to go over to a friend or cousin’s position and sit on the couch until your eyes are bloodshot . Being able to hop online and readily get some co-op Online Versus in as you’re both in your own houses will be huge!

Hey Con, you better have your skates sharpened and also stick… our co-op Online Versus domination will make it’s return.

We’m equally as eager for EASHL Threes. If you’ve never played EASHL 6’s(all individuals on either side), then you might not know exactly how much fun this is going to be. I got my fingers in it again in April and will also tell you from experience I believe it will grow to be a simple fan favourite.

Playing with EASHL 6’s is undoubtedly the most enjoyable way to play with NHL 17 right now. It is the most true hockey you may play without enjoying real life hockey. This means you have the most control possible, it is all in your own team.

A problem with EASHL 6’s is that you need 5 buddies… I have been alive for almost 27 years and before I became heavily involved in the NHL community that season I had only 2 friends who I knew in real life that possessed the game. Therefore, if you’re in that situation and you would like to play with EASHL 6’s then you basically should join a league such as the LGHL. Point is, it is not simple to get 6 people together.

Queue EASHL Threes! Now you only need 2 friends; should you use AI goalies. Although, for maximum enjoyment you truly need to acquire human goalies also. AI goalies are foreseeable and therefore takeaway the authentic hockey sense of a full EASHL 6 or 3v3 matchup.

Except for a unique guide on how to choose the most suitable goaltender for you based on your playing style, there are also some special ways which quite different from the previous very old ways for scoring- top rated goalies in NHL 18 are among them.

Top 5 skating ability stars
There is almost no difference from other EA sports games, speed and acceleration decide whether a team will succeed or not in the end to a large extend. A team with the fastest players has a higher possibility to win the game, he can easily against defenseman who even have a slight lower speed than him. He also has the ability  to stop the further move of your opponent.

Welcome to www.mmocs.com, we are a professional and reliable NHL 18 Ultimate Team Coins online supplier. If you are still searching for the safe store to buy Cheap Hut 18 Coins fast, absolutely, we are the best.