NBA 2K is known for its ability to improve and provide a better and more realistic gaming experience for its fans every year and this year is no different.

This year, “NBA 2K18” is the game that fans of the basketball simulation game have been waiting for. The newest game leaves many with no doubt as to why NBA 2K is the second most popular simulated sports game in the world. And as a fan, it is hard not to see the continued effort of the game series to provide game play that is more realistic than ever.

On the court, 2K18 is an incredibly crafted experience for gamers and its graphics give gamers the ability to really feel as if they were watching an actual National Basketball Association (NBA) game.

Another unique aspect of 2K18 is players in the game are given the ability to have their own individual attributes, much like how the players they represent do in real life. Each player can be handled differently, which means that by knowing the strengths and weaknesses of each player in the NBA, a fan can be more successful in the game. 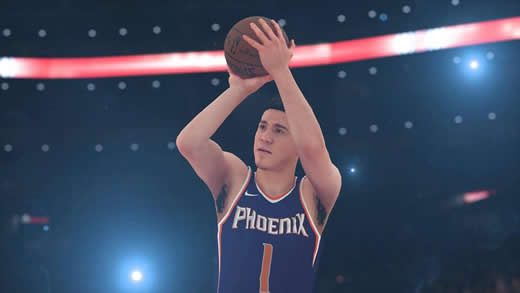 Like most previous 2K games, “NBA 2K18” offers gamers the ability to play in many different game modes, including managing a team in MyGM and MyLeague modes, and creating a player and his career in MyCareer. MyCareer is the only game mode where there is a storyline that plays out through the created player’s career on court and his activities off court.  Other game modes in the game include, MyTeam, MyPark and a new addition to the 2K franchise, Neighborhood.

“NBA 2k18” is a crafty simulation. In order to get better at the game, gamers have to spend a lot of time working on their craft, whether it is by practicing the player’s jump shot, dribbling, defense, or their ability to get to the basket. Luckily, the game gives players the ability to work on and improve player’s specific skills in the Neighborhood mode.

The major time investment to improve a custom player’s skills is the only real negative aspect of the game since for most 2K18 players, time is of the essence when competing against friends online.

Overall, 2K18 provides an amazing gaming experience, and is everything many faithful 2k fans could have asked for.

From graphics, to on court play and the many off court activities, NBA 2K18 is an excellent improvement from previous 2K games while still remaining true to its NBA 2K basics. It draws in the interest of new players with its ability to keep the gamers interested in the basics of the game while also giving them the opportunity to add their own individuality.

Mmocs.com has some great deals on cheap NBA 2K18 MT. What’s more, we have lots of amazing activities. Because we have special discount for times.

NBA 2K18 will bring the greatest players of all-time, from every franchise, to compete on the virtual hardwood for the very first time. Which franchise’s All-Time Team reigns supreme?

Users tweet their selection out to their followers who can then make their own choice in the matchup. This strategy allows the 2K team to showcase the classic teams they’re featuring plus it sparks a debate among fans and builds their excitement for the game.

Here’s a complete list of the teams included in this year’s game:

Are you finding much more NBA 2K18 news and guides on latest ratings. Find much more here at mmocs.com. And buy more cheap NBA 2K18 MT here you get the most satisfying service here.